Amazing Grace, how sweet the earth,
the dirt between my toes,
the sun pours down upon my crown,
the mighty river flows.
Amazing Grace, how sweet the sound
of bird song in the trees,
the air is dense with fragrant scents
soft floating on the breeze.
Amazing Grace the ocean swells,
the waves break on the shore,
the moonlight rides upon the tides,
oh, who could ask for more.
Now we’ve been here four million years
sustained at her sweet breast,
let’s sing her praise for all our days,
then in her womb we’ll rest.
© 1995 by ElIzabeth Cunningham. Reprinted by permission. For more information or permission to reprint: www.elizabethcunninghamwrites.com
Wouldn't it be wonderful to hear these lyrics sung, often and everywhere? Posted by Sandy Eastoak at 2:41 PM No comments: 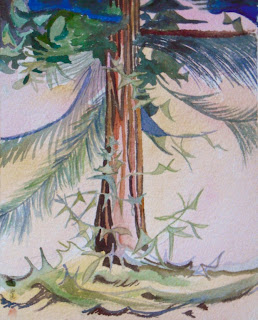 I’m not particularly deliberate in the way I paint. Not too much, “I’m going to paint such and such.” It’s more, “Great mother, show me what you want me to paint,” or “Salmon spirit, move my hands to create what you need to be seen.”

I think more about smaller spirits and spirit guides than I do about God. St. Francis had it right, seeing God’s face everywhere, in birds, in tea cups, in daisies on the hillside, in the hill itself. Theories about God don’t move me very much, intimacy moves me. My paintings are about intimacy. So are my poems, just another medium for the same family photos.

Ecological restoration isn’t just about the material changes we need to make to protect life and health. It’s also about emotional relationship with other beings as equals, as guides, as benefactors. This is the ancient way humans interacted with land and its inhabitants in every culture that has endured sustainably for centuries. It is the new way that will save us. It is also the way of spiritual intimacy with god, however we name, imagine, or worship  timeless being.
Posted by Sandy Eastoak at 11:22 AM No comments: 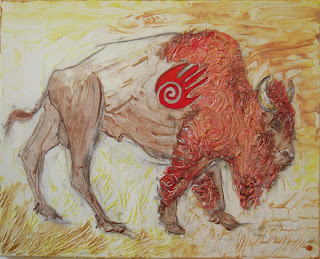 This shift was a great spiritual deepening for me. It had come a few years after I woke one morning feeling a great, vast, infinite even, female presence, who whispered to me the the dawn light: It is not wrong to believe in me. This was the goddess insinuating her way into my fairly disciplined Zen practice. But as I wove together Zen, goddess presence, ecology, art, parenting and gardening, I was taken on a journey whose landscape almost eluded me for much of the travel.

By the time I saw my work as serving the earth’s healing of us, I was getting my bearings. I was fully immersed in belief in the consciousness of all beings and even all things. What Zen Buddhists call Emptiness, Christians call God, and pagans call the Great Mother is the totality of consciousness, matter, energy, space—manifested perfectly in everything from saints to grasshoppers.

So earth healing art becomes a matter of celebrating family. All our relations.

My spiritual practice is to pay attention to the movement of spirit in the natural world. I don’t just mean wilderness and magnificent species like salmon and eagles and pronghorn antelope, however important these may be. I’m loyal as well to the wilderness of my small town yard, the spider in my sink.

I heard a Pomo man say to a group that to understand the native view of nature, you would have to feel, when a tree is cut down, the same way you would feel if your brother were killed.

That’s what my art is about. I was raised by trees and went out into the world with that much grief and horror when a tree is cut down. I went out understanding that nothing belongs to humans—not the land, not the water, not consciousness, not playfulness, not invention, and certainly not sacredness.

Posted by Sandy Eastoak at 9:43 PM No comments: 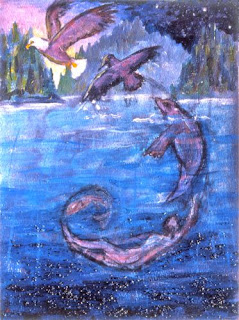 As I considered the underlying causes of ecological destruction, I noticed that the idea that art passively expresses what a society or culture is up to isn’t the whole story. No, art actively prescribes what a society or culture does by affecting what its members can see as real. I saw how art, particularly the art celebrated in our art history books, museums and galleries has played an important role in creating the kind of consciousness that destroys its habitat.

Crisis solved: my role in environmental protection, my form of ecological activism, was precisely art. I committed myself wholeheartedly to a career of creating art that would change that consciousness. To whatever extent lies in the power of one individual, I would nudge our culture toward the paradigm of ecological healing and sustainable harmony.

At first I took a somewhat political approach to what such art would look like. I felt the urgency of stopping pollution, saving rainforests, decommissioning nuclear power plants. At some point, I began synchronizing my artistic process with ritual. I began each studio session with meditation, then an intention that the work I was starting would somehow, mysteriously, be healing to the earth. Then I worked. I gave myself to trusting that spirit presence I was experiencing more frequently: it would guide my work into a form that was needed.

After a time of working this way, I was one day dumbstruck by the hubris of seeking to heal the earth. I laughed out loud at the absurdity. We’re the frickin’ disease! By that time I had a personal, visceral awareness of the vast consciousness of the earth and her life forms. I reframed what I sought to do as an artist: to serve the earth in her efforts to heal us. To heal us crazy humans so that we might return to harmony before destroying the many species dependent with us on the very conditions we’re so determined to destroy.
Posted by Sandy Eastoak at 5:49 PM No comments:

I began to paint and draw seriously at about the same time I first had woods to wander in at leisure—about 6 or 7 year old. Until I was 12, the time I spent there was so vital that I often say I was raised by trees. The viewpoint I’ve brought to almost everything is unique in my family and society, but quite common in the family and society of forests. Ecological values entered my bones and my soul sitting at the knees of my wise elders, the trees.

The various storms of adolescence and young adulthood blew me through some religious experimentation, especially with Catholicism, atheism, Buddhism, and ancient goddess religions. Zen Buddhism, modified by pagan goddesses, influenced me over the long haul. But over the years the wisdom of the forest has become the prime measure of spiritual truth.

When I look around the world, taking in its vast suffering as well as its unfathomable beauty and persistent joys, I conclude that the most important spiritual question facing our culture and our species is how to restore harmony with the rest of nature, with all the diverse members of the family of life. I include in this beings that our culture doesn’t usually consider living, like stones, rivers, the underground seep of water, the wind and clouds.

The urgency of the environmental crisis came to me early. Raised by trees, I was aware of the degradations of development before I reached my teens. I saw it with my own eyes, without anyone mentioning it. By the time I was in college, many people had noticed the urgency, and created Earth Day. This public expression prompted a personal crisis: how could I be an artist (which was all I ever wanted to be) when the world desperately needed saving? Posted by Sandy Eastoak at 5:14 PM No comments: 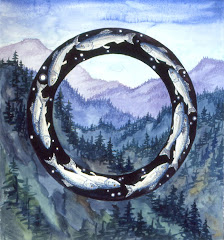 Since 1974, I've dedicated my work as a painter to healing the disharmony between humans & other forms of life. Living in Northern California, I've settled into the rhythms & species of redwood forests & coastal waters. My process is shamanic. I offer drumming, sage, pepperwood, & singing as I begin my work. I rely on the spirits of this place to guide me, earning their trust by trusting them. On this site I share images they have given me, how together we honor the cycles & waters that create & sustain life.

Sandy Eastoak
Raised by trees in New England & further educated by forests in Oregon & California. For 35 years I've been painting to restore harmony with all our relations. I'm a founding member of Sebastopol Gallery & support the work of Honor the Earth. A life-threatening illness brought out my affinity for NDNs. I yearn to help restore Native values to American culture & policy. Meanwhile my two daughters keep me in line.